Posted on: February 15th, 2018 by sobrietyresources 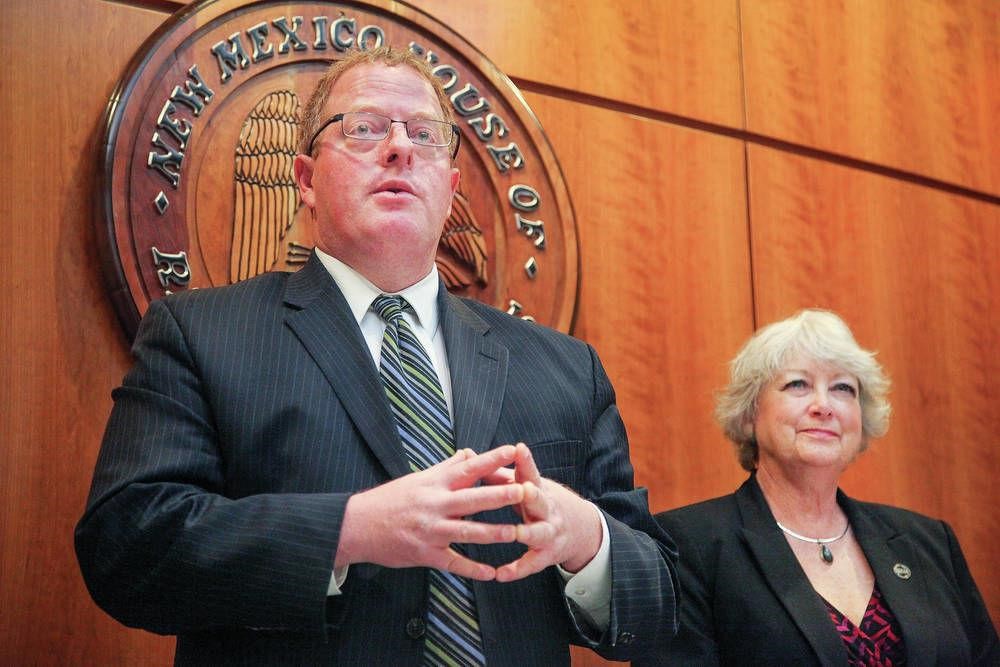 New Mexico lawmakers injected a dose of political pressure Monday into an unwavering but so far unsuccessful effort to add opioid use disorder to the list of qualifying conditions for medical cannabis in New Mexico.

State Sen. Jeff Steinborn and Rep. Joanne Ferrary, both Democrats from Las Cruces, held a news conference at the Roundhouse to bring attention to companion memorials they are sponsoring, calling on Department of Health Secretary Lynn Gallagher to allow people with opioid dependence to obtain medical marijuana to help them break the chains of their addiction.

“It is past time that this secretary do this,” Steinborn said. “People are dying every day in the state of New Mexico from opioid abuse, and medical marijuana has proven to be a safer treatment for any underlying conditions and certainly, hopefully, to step people down from opioid addiction into something safer that won’t kill them.”

Twice, the state Medical Cannabis Program’s advisory board has recommended medical marijuana be allowed as a treatment for opioid addiction.

Gallagher, however, has the final say.

Gallagher, who is married to Santa Fe’s former police chief, rejected the board’s initial recommendation last year, saying she could not say “with confidence that the use of cannabis for treatment of opioid dependence and its symptoms would be either safe or effective.”

The advisory board heard another petition in November and once again recommended adding opioid use disorder to the list of qualifying conditions. But Gallagher has yet to make a decision on the board’s most recent recommendation, which was unanimous.

“The Secretary is awaiting their written recommendation from that hearing, at which time she will review the scientific evidence presented and make a decision,” department spokesman Paul Rhien said in an email.

Steinborn and others said Gallagher should take action right away, saying more delays could cost lives.

“The reality is, more people will unnecessarily die that could’ve benefited from this, and whether it’s one New Mexican out there or countless scores of New Mexicans that will benefit from this over time, this is about saving lives,” Steinborn said. “There are patients out there who can benefit from this and need this alternative today.”

The memorials, which have no force of law but are an expression of sentiment, already have cleared a number of committees. But with the 30-day legislative session ending Thursday, time is running out.

“We have limited time left in the session; that’s really the challenge to getting bills [and memorials] passed in these final few days,” Steinborn said. “We’re certainly raising our call to get the [memorials] passed, but more important, to urge the secretary to act today, not to let another day go by without approving this.”

Anita Briscoe, a psychiatric nurse practitioner from Española who has been leading the push to add opioid use disorder to the medical cannabis program, said research shows medical cannabis helps people get past their opioid dependence.

Cannabis helps reduce withdrawal symptoms, such as nausea and insomnia, and people receiving medication for opioid use disorder have better treatment outcomes when they’re also using medical cannabis, according to the Drug Policy Alliance, a national nonprofit group seeking reforms of drug laws.

Briscoe said she saw the results firsthand when she was doing medical cannabis referrals in 2016.

“People were coming back to me a year later to renew their license, and they were saying, ‘Oh, by the way, I was able to kick heroin,” she said. “I started collecting data, and I started asking my colleagues as well, ‘Are you seeing this as well?’ They said, ‘Indeed, we are.’ ”

For Briscoe, the push to add opioid use disorder to the list of qualifying conditions for medical cannabis is personal.

“I’m from Española, New Mexico. I was born and raised there,” she said. “I know that West Virginia now has the No. 1 problem with opiate use disorder, as well as Ohio. But for literally decades, if not generations, Española has had that problem. We just never have been in the limelight like other states have. I have grown up seeing Española ravaged by heroin.”